Lous and the Yakuza

“To work with Lous is to receive an eternal impression of her intensity, her multiplicity, her beautiful character.  Nothing about her music, her poetic lyrics, or her approach to fashion feels recycled or nostalgic.

She is the future,” says Wendy. 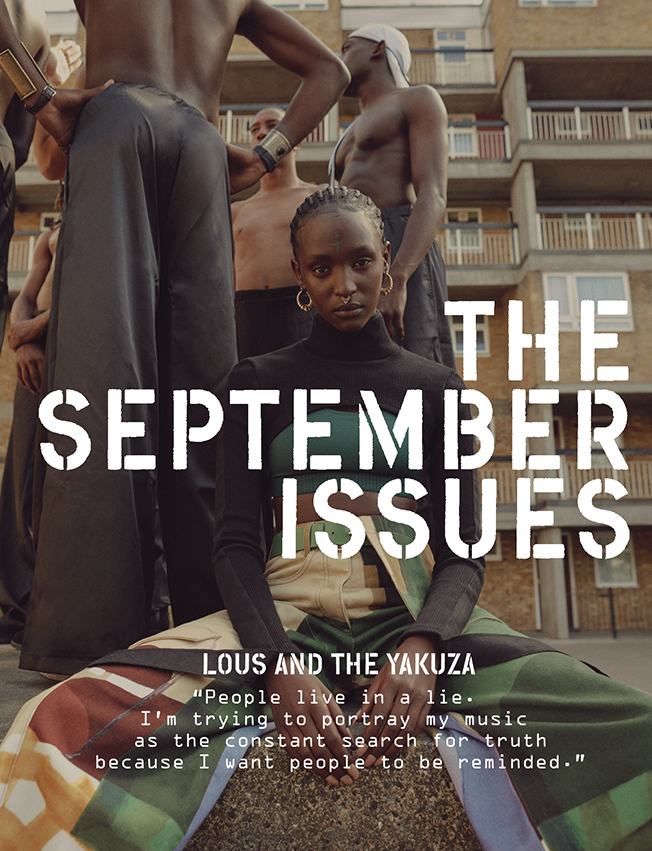 WENDY: For “Dilemme,” which was such a special discovery of what Lous and the Yakuza could look and be like, we drew on street dance and high art to describe the intense contrasts in your story. I also wanted to bring the idea of your “Yakuza” to life, as a brotherhood who have supported your pursuit of art. Lous, what does “Dilemme” mean to you?

LOUS: I think the song is a good representation of my personality, which is a lot of ups and downs, a lot of black and white, I don’t know any gray zone. The hook says, ‘I don’t know if I should be alone or stay with the people I love.’  And, the reason I’m scared to stay is because, the more I love someone, the more the person is likely to hurt me.  I really don’t swallow pain right and I’m not really expressive about it most of the time (like, right now with my twisted ankle, I’m dying!) 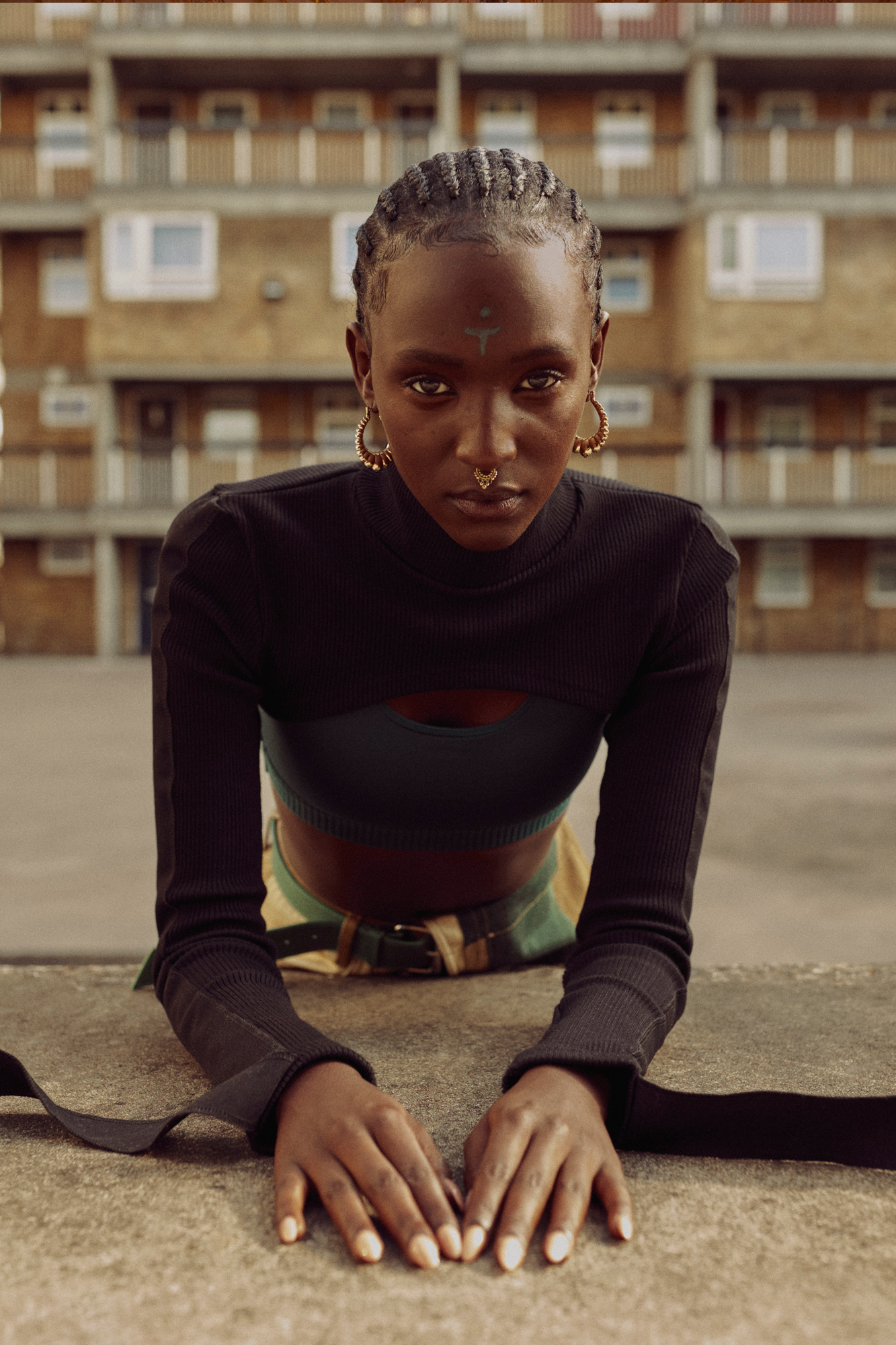 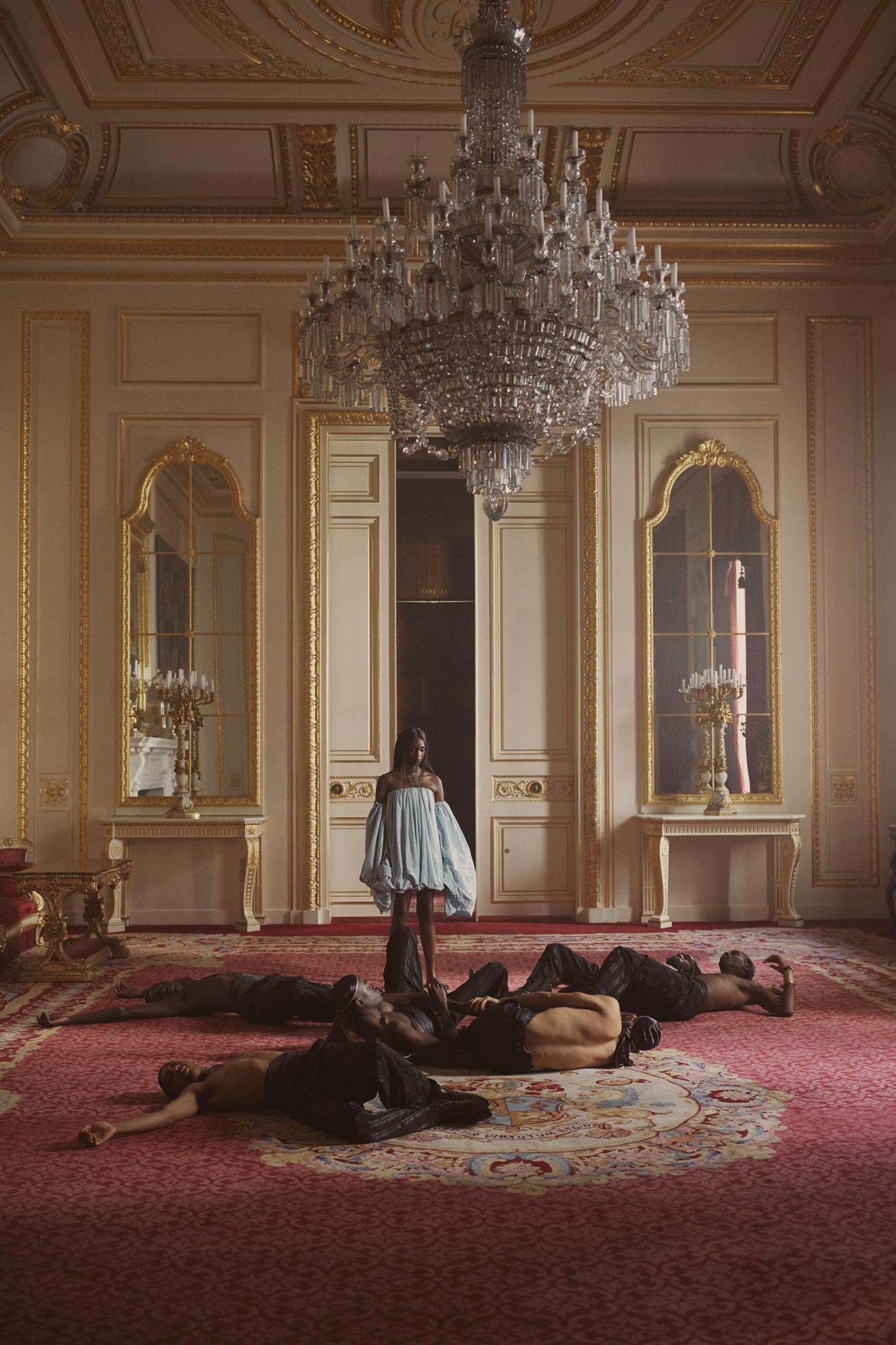 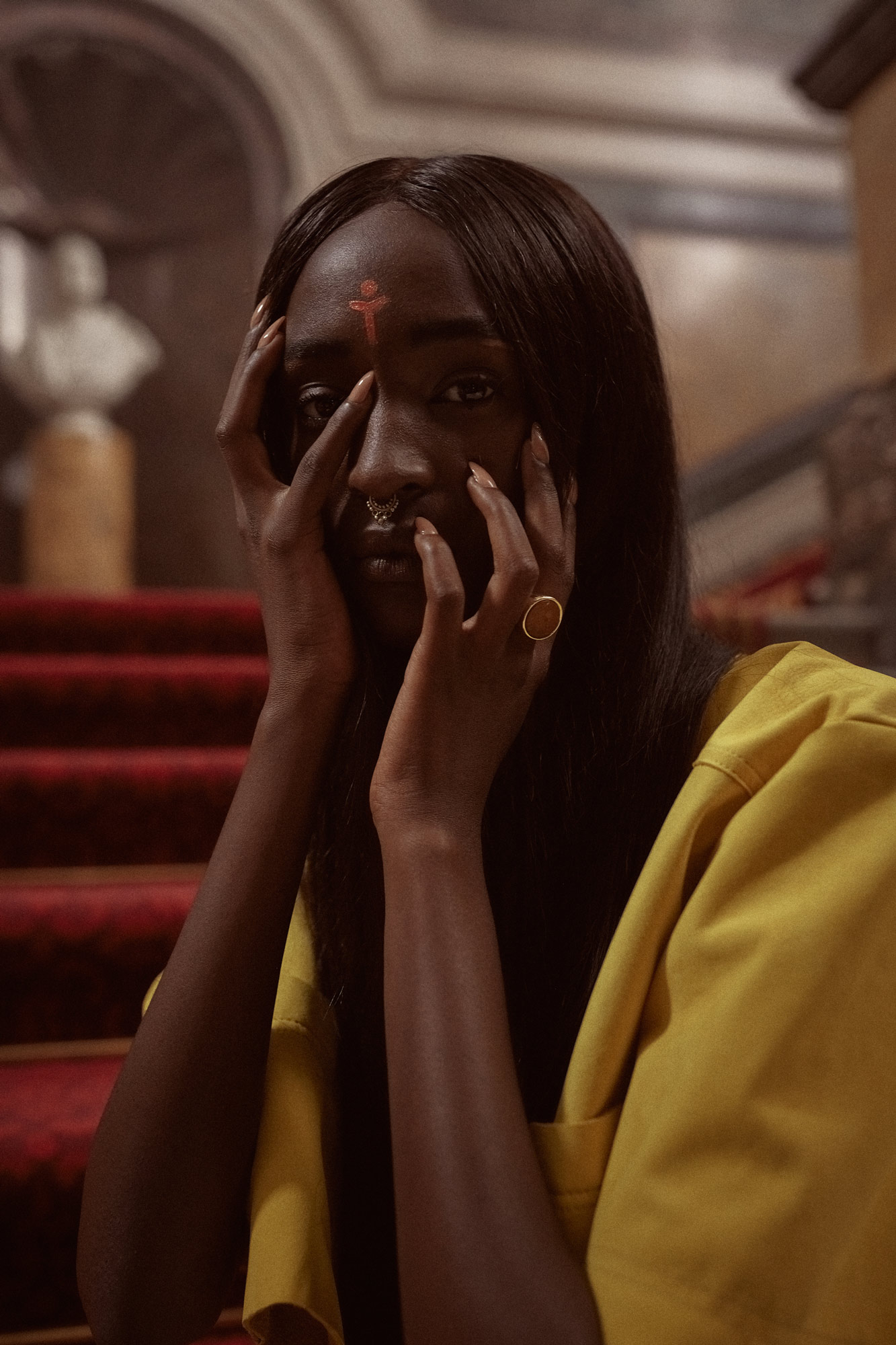 LOUS: I think it’s really about loneliness, which is the story of the song that I wrote after having a big clash with my best friends. I was going on one path with my career and they were going on another path, and they really took it the wrong way that I decided to go with a record label actually. This is what happened.

I was just like, man, it’s time to focus on my shit.

And it lasted for two years. “Ce n’est pas un drame, Si je ne fais plus la fête,’ which means, ‘It’s not a drama if I don’t party no more,’ something I used to hear so much.

WENDY: [laughs] That’s amazing. So, it’s really about your crew trying to hold you back.

WENDY: That’s so crazy. I had no idea.

LOUS: That’s why I started writing the song.

WENDY: I’m glad I didn’t know it because that would have been a totally different video.

LOUS: You were ready to have like a boring interview [laughs].

WENDY: No, no, not at all. I was thinking of it more as like a global story versus such a specific story.

LOUS: Yeah, it started specific. The song is more global, even though I incorporate that drama party thing and then also the skin color thing because I feel it’s so weird when people be like ‘Black people are Black.’ Like, we’re not Black. I’m not Black. That’s why I say my skin, it’s ebony, ‘Ma peau n’est pas noire, elle est couleur ébène.’ Because you don’t see black really in nature and the idea of black is always like darkness, sorrow, deep, like negativity. I understand that we use this as a generic term. And, white people, they’re not white either. They are beige or rosé [laughs], you know?
But it was really out of frustration that I wrote the song, like fuck, if I could I would just be alone, but I know also that I’m not a loner, at all. 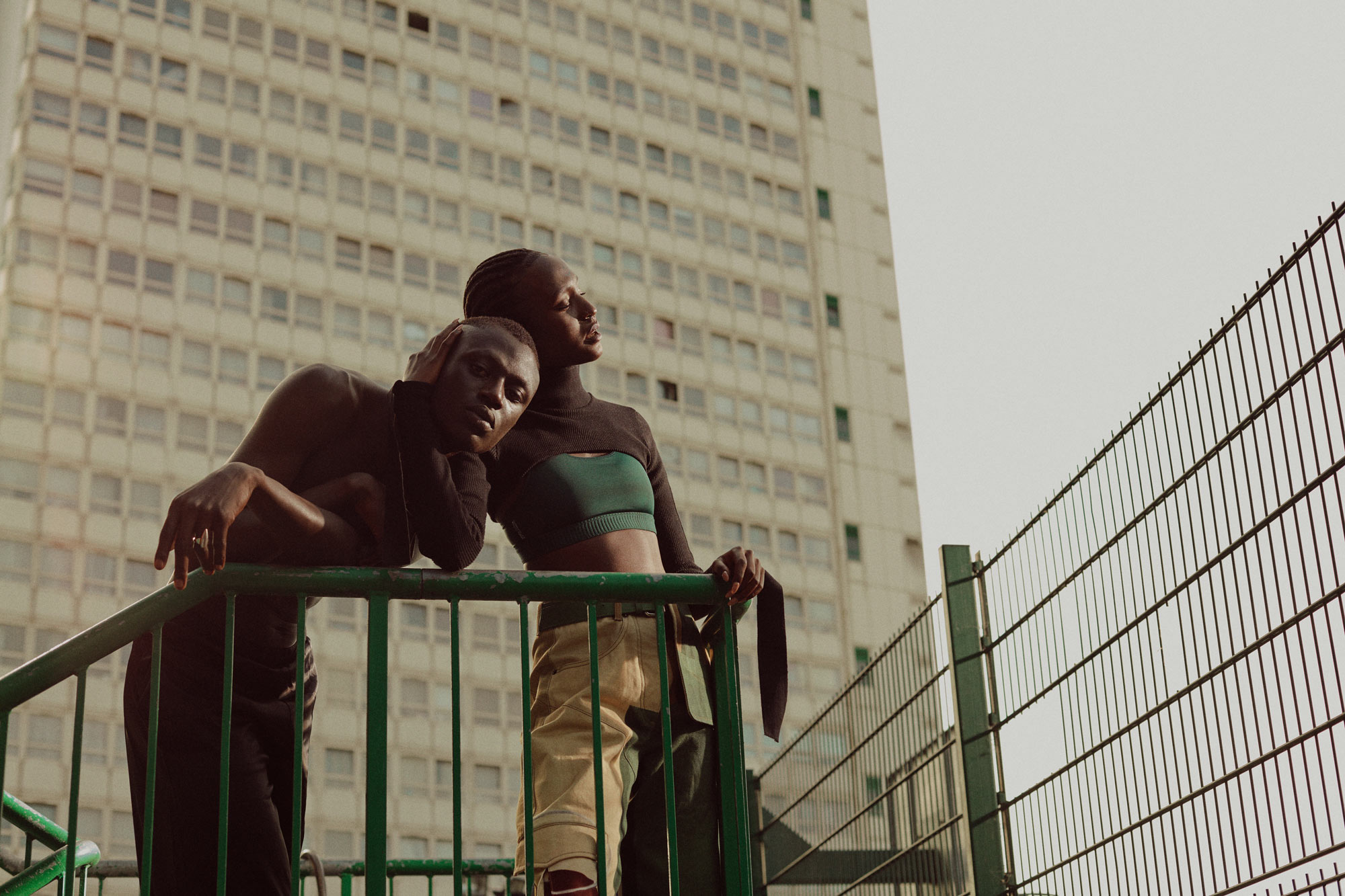 WENDY: Your music is trap/hip hop influenced and your lyrics are highly personal and poetic. How do you describe your music?

LOUS: I would describe my music as a constant search. A constant and infinite search towards truth.

LOUS: This is what I try to achieve with each song, just to be completely honest with myself because, man, we lie to ourselves so much. Sometimes it’s disturbing how we can believe in our own lies when no one is pressuring us. We lie to ourselves to make ourselves feel better, and I’m trying to break that thing, that totally human thing that we need to protect ourselves.Like, if you tell yourself the truth all the time, you’re not gonna have a happy life [laughs]. So you need that kind of smooth way to put things together for yourself. That’s what I try not to do with my music. I try to be just raw.

In terms of sound, I try to be as minimalistic as I can. I wanted the message to be powerful, like we designed the production to support the lyrics because my project is really based on lyrics.

WENDY: Yeah, it’s lyric based, for sure. Do you have a favorite scene in the video?

LOUS: I feel bad saying I have a favourite scene! For me, it’s really hard to have one. But, I love The Raft of the Medusa. At the same time, I love the meaning of all the things we represented, but the first one I thought about was that one, to be honest.

WENDY: Yeah, I love that one too.
What do you feel about the future? What is your vision of the future for you?

LOUS: I think the future should be mixed, should be proud. The future should be bright. I want to be in peace. I want people to be successful, for everybody to achieve their dreams, so we need more opportunities. And I think, the future for me looks like a lot like breaking [down] walls, because a Black female artist like myself doesn’t really exist here yet (in France). There’s no clear path. So we try to be really inventive and creative on how we showcase my music, how we bring it to people, because it’s really a challenge. The near future is challenging and I hope that the far future is gonna be bright.

“…the future for me looks like a lot like breaking [down] walls, because a Black female artist like myself doesn’t really exist here yet. There’s no clear path.” 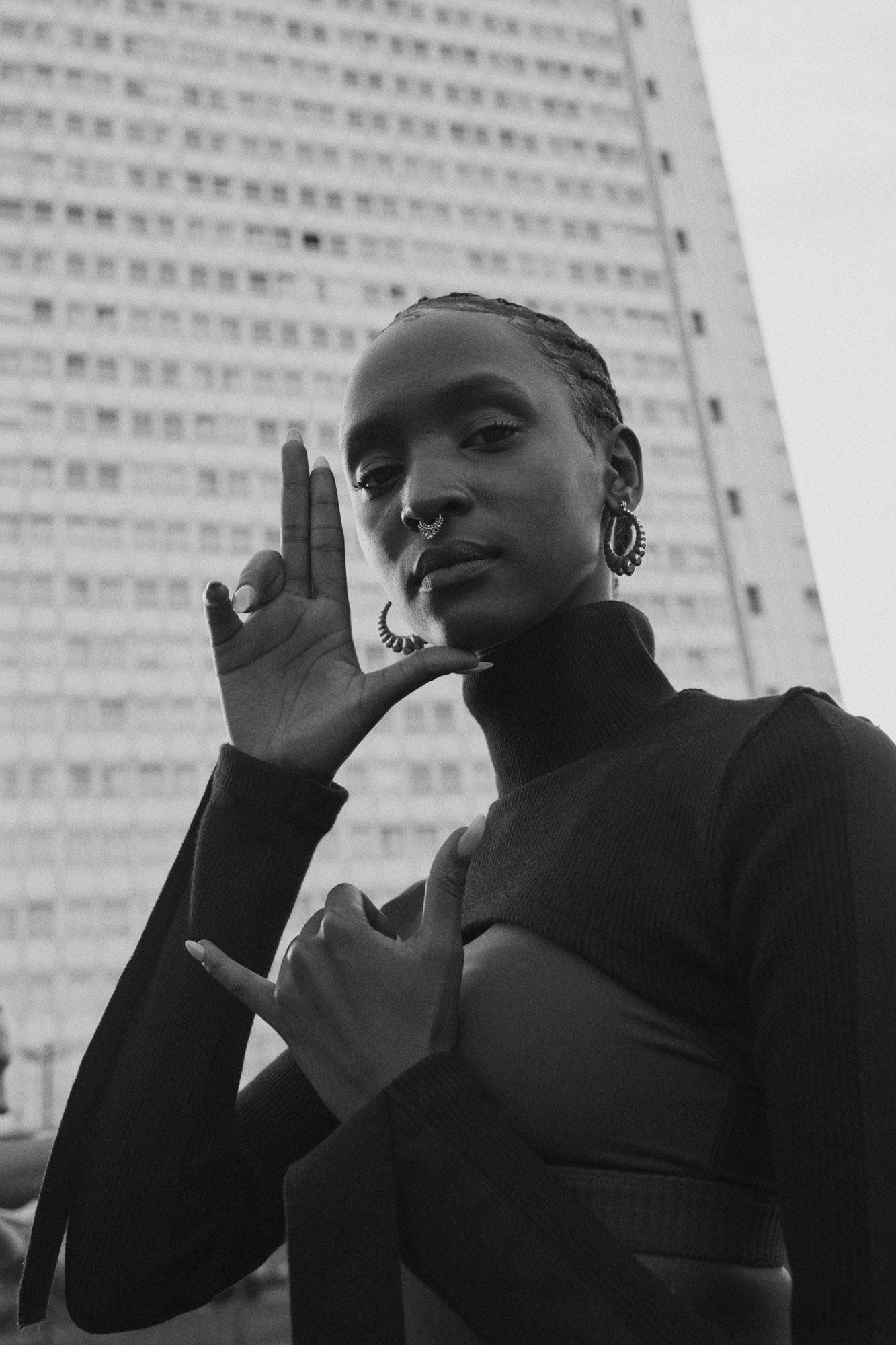 WENDY: The Yakuza in your name represents all the people who have helped and worked on your project. Since making “Dilemme,” has the concept of the Yakuza evolved?

LOUS: Of course. Especially since we made “Dilemme.” For me the Yakuza were people who worked through me, professionally and not really artistically. I wanted to give them credit. And then, with “Dilemme” we added the dancers, which was never part of my Yakuza original statement. You know, I never thought creatives could be part of the Yakuza because I was the one. I was the Lous creative and the Yakuza people helping me be creative.

And, incredibly, because of “Dilemme,” I grew to have a relationship with tons of dancers, even with “Tout Est Gore,” like I’m still really close with a lot them and they’re so supportive, you know. It’s crazy how fucking supportive they are. Like the comments on pictures, they’re always being like ‘you’re the Queen, you’re the Queen.’ The Yakuza, they’re so fucking cute.

When you trust people fully, like, with you, I know you’re going to make it happen, I trust your vision to an extent that you have no idea. I’ve never been like that – I’m a fucking psycho about everything, you know. So when I find that, for me it’s like O.G. Yakuzas, it’s the trust. Artistic trust is so hard.

WENDY: That’s what it’s about, the artistic trust. That’s the goal. At the same time that there’s the concept of the Yakuza, there are the actual Yakuzas, the dancers, and they’re in New York and they’re in Paris and London, it’s so cool. 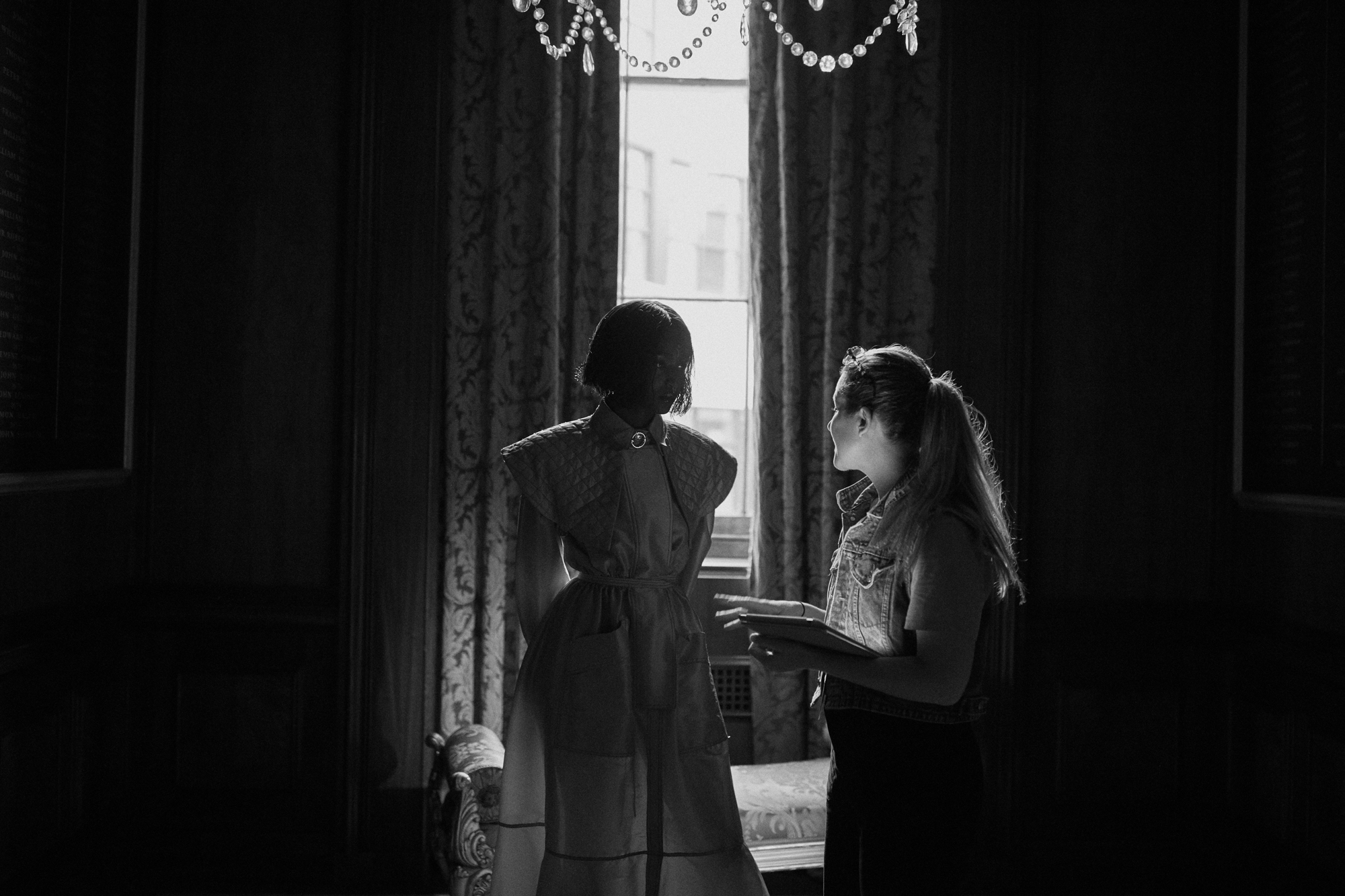 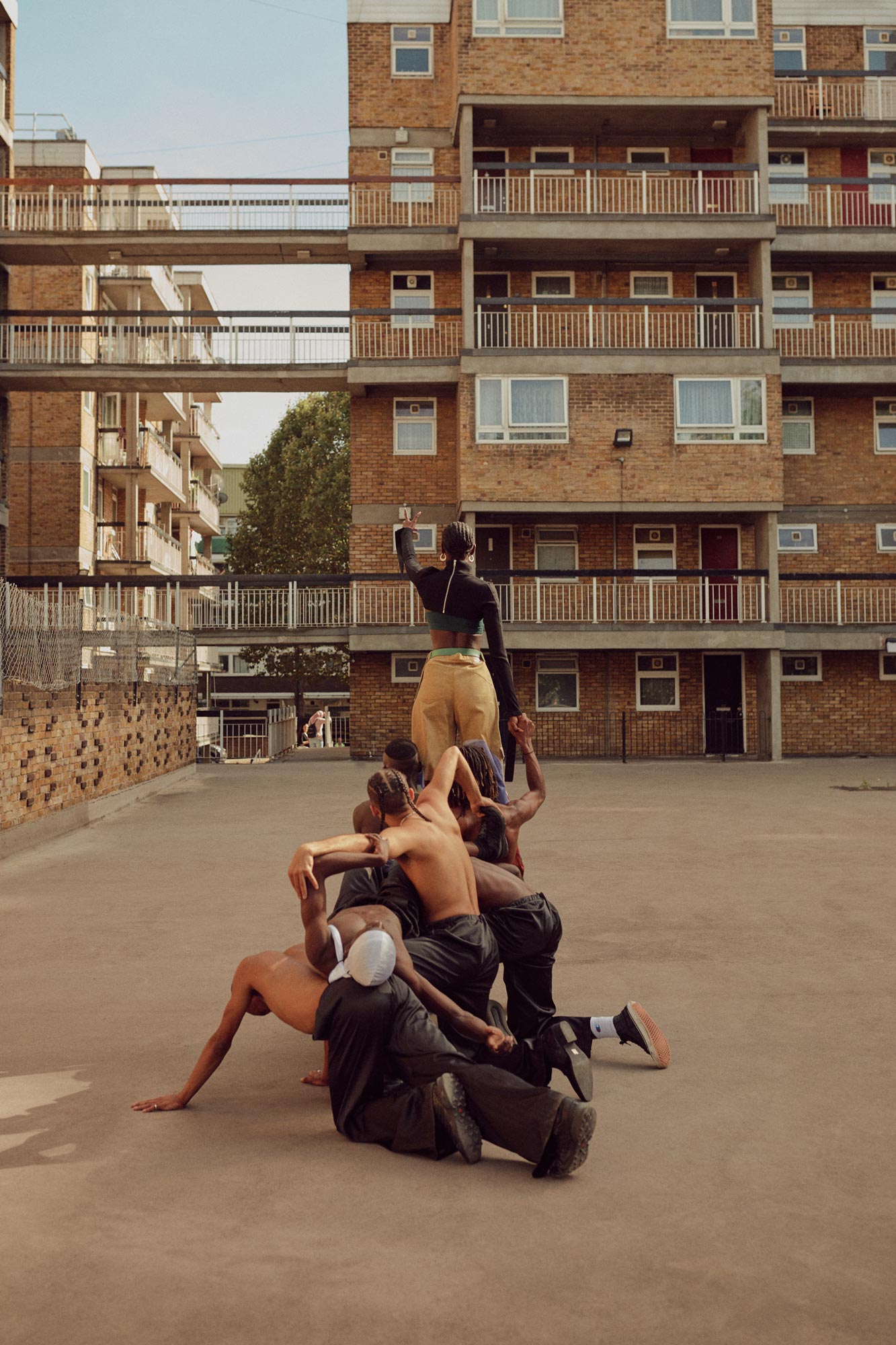 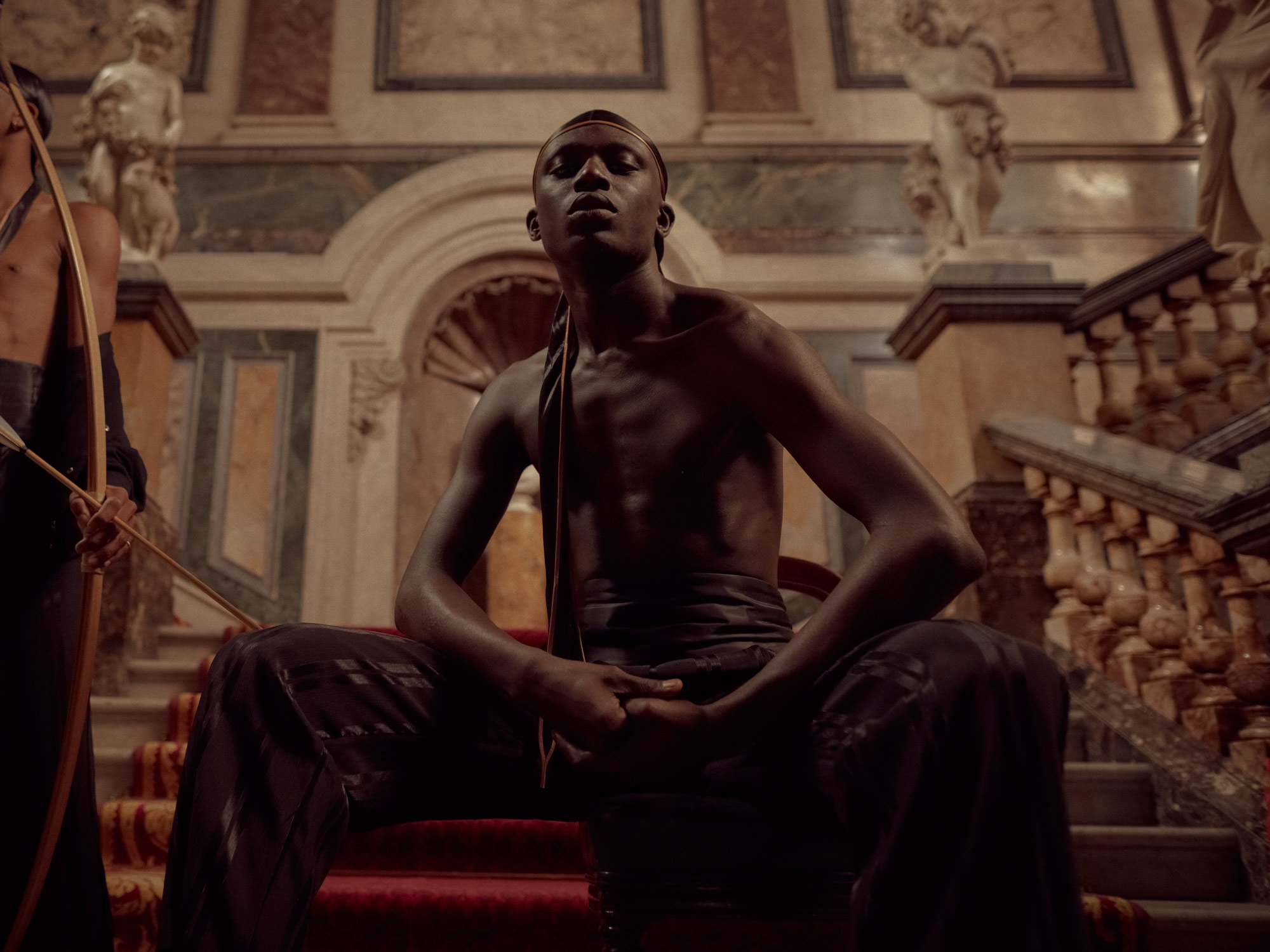 WENDY: Being signed to a record label in France,  a country with some old fashioned ideas of what a chanteuse should be, you’re a walking vision of the future. Being an African artist in France, is it hard to talk about race?

LOUS: I think it’s really hard. It’s hard to talk about anything! Homosexuality, sexuality, feminism, all these big battles that broke out in the States. The ideas are just being born here. Race shouldn’t be something uncomfortable unless you do something fucking wrong. It’s supposed to be, ‘Yo, look we’re different, we have different energy, different culture. Give me what you have, I’ll give you what I have, let’s share, you know?’ In France the colonial past is really huge. I’m from Congo, and Belgium is really worse; I feel like there has been no real pay back for what has been done to Congolese people, because of that colonial past. I feel there’s a lot of surface talk and most of the people are like, ‘Why are you talking about this? We’re so over it, look at all the artists – they’re all Black. The rappers are Black, that girl is Black too.’ And I’m like, she’s one person, that’s not a community!

People live in a lie. I’m trying to portray my music as the constant search for truth because I want people to be reminded.

People are like, ‘but if you don’t like it here, nobody forces you to stay here.’ Oh, word? You think if I could stay in my country … I wouldn’t think twice, dude. They don’t understand the actual impact, because they don’t talk about it.

You have to be interested in other peoples’ culture. We have access to so much knowledge and just be curious about one another, you know? I know basic shit from everywhere, and when I don’t know, like I’m so happy to learn. Racism will always be if we don’t teach people to be positively curious about other cultures, not coming with negative thoughts from the start. Open your brain. Go to the other people with no stereotypes in mind or prejudice, just be open. And that’s when racism is gonna disappear, when we teach kids to be interested in other cultures.

LOUS: I hope so. Cross fingers that it’s the right timing to appear.

Lous and The Yakuza’s debut album, Gore, a mix of trap and chansons francaise, is produced by El Guincho and is out on Sony Music France this spring. 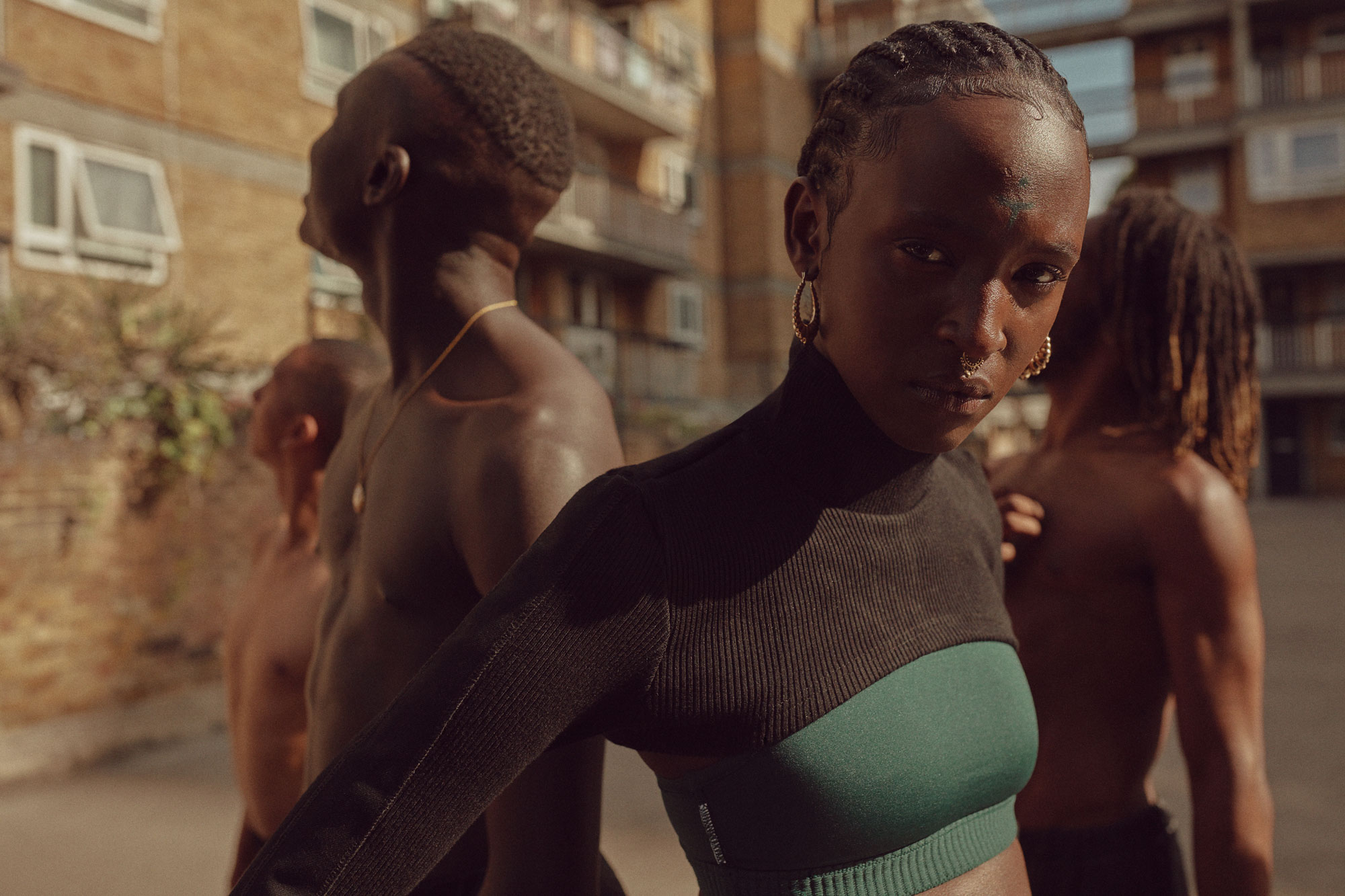